At Seattle Pride Hockey Association, we are building a champion organization that is committed to creating a diverse and inclusive hockey community. Hear from our Board of Directors and officer staff about their hockey story. 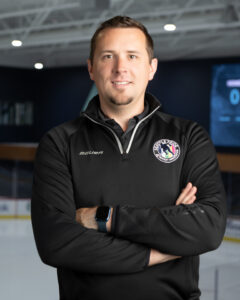 Steven has enjoyed hockey ever since he was a little kid. From as far back as he can remember, he would attend Seattle Thunderbirds games with his dad back in the Seattle Center/Key Arena days.

It wasn’t until the 2015-16 WHL regular season that his passion for hockey intensified.  Steven followed former Thunderbirds player, Mathew Barzal, after his debut, and after the Thunderbirds won the Ed Chynoweth Cup in 2017 Steven decided to become a hockey player himself. In November 2017, Steven hired former University of Wisconsin forward, Molly Doner, to teach him how to ice skate and be a hockey player. Molly has played with players who have competed in the US Olympics so she was the perfect coach! It was from this that propelled Steven’s passion for the game.

By December 2017, Steven started playing in the former Greater Seattle Hockey League (now Kraken Hockey League) starting with the Letterkenny Irish and soon after, the Trash Pandas. Steven grew his Trash Pandas team from one team to three in a matter of two months, and he added a fourth team to the franchise in Summer 2021.

Steven became deeply involved in league operations and it became clear that he would be a valuable asset to add to the league as a full-time employee. In March 2019, Steven was hired to be director of league operations for the former Greater Seattle Hockey League where he helped grow the league by adding several dozen new teams, hundreds of new players, and curating several new programs, including Sprinker Draft League and a November tournament in the annual The Great Puckaroo Roundup.

In April 2019, Steven — together with teammate Joey Gale — founded the Seattle Pride Hockey Association to bring hockey closer to underrepresented communities. You can read even more about Steven in this article on NHL.com. 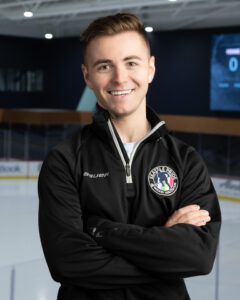 At the age of three, Joey first laced up his skates (well, his dad did) and stepped onto the pond for the first time. Joey grew up playing league hockey in Minnesota, the self-proclaimed “State of Hockey”, and played up until high school. While he still found his way to the pond, Joey didn’t jump back into organized hockey until 2015, following his graduation from Drake University. After making a trek from Des Moines, IA, to Seattle with his partner, Joey began playing in the Greater Seattle Hockey League (now Kraken Hockey League) in 2018.

In 2019, Joey connected with Steven on the idea that Seattle needed an organization to represent queer and diverse players in the PNW. As the Kraken made headway growing the sport in the area, they found a need to share the sport with LGBTQ people as well – so the SPHA was born. When Joey is off the ice, he works at an ad agency in downtown Seattle as an account executive. Joey’s most recent work in the LGBTQ space includes development of the Pride Brand Guide to help companies and brands navigate advertising during Pride month, as well as writing a chapter in the 2021 book called Everyday Hockey Heroes. 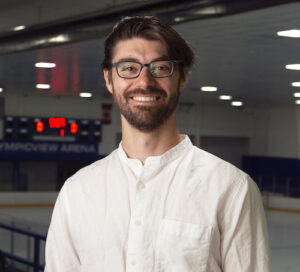 Steven is a Seattle based content producer with a passion for the game of hockey. When he’s not on the ice, he spends his time with his family, his husky Luna, making music with his friends, and on the golf course.

Originally from Detroit, Michigan, Steven’s love for hockey began during childhood; wearing Red Wings jerseys to school during playoffs, going downtown to see games at Joe Louis Arena, and playing in youth leagues. After college he started his producing career in New York.  His work has been featured in off-broadway productions, Indie film circuits, and live TV broadcasts.

Hockey is the greatest game on earth, and it has always been a game of honor and accountability. But it also comes with a history of inequality, silence, and privilege. Steven is honored to be a member of the SPHA, to promote inclusion of all people who love the game; regardless of race, sexual orientation, or gender identity. We must keep even the things we love most accountable, to create change and equal opportunity for all. 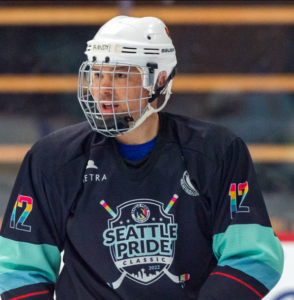 Randy Coté grew up in Snohomish County surrounded by hockey. He and his siblings played in the Seattle Junior Hockey Association as kids, his dad was a volunteer coach, and they were all supported by the world’s greatest hockey mom. With the exception of a few pick-up games over the years, he picked up organized hockey again after a 20-year hiatus back in 2017.

Randy spent ten years in the sports and live events world with the Seattle Storm, Seattle Thunderbirds, and Pac-12 Conference, and believes in sports’ ability to promote social justice to our community. He currently supports the Greater Seattle Business Association (GSBA) — the largest LGBTQ chamber of commerce in the nation —  in an advisory board position and as a facilitator for the GSBA Scholarship Fund. Outside of hockey, Randy works as a marketing executive, and enjoys hiking the North Cascades and traveling the world with his husband. 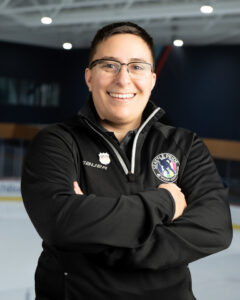 Alexis originates from the Bay Area, California, where she learned to play hockey in college (Go Sharks!). She moved to Seattle in 2015, and quickly joined the local women’s hockey community. She served as President of the Seattle Women’s Hockey Club for 3 years, before volunteering to help with the SPHA.

During the day she works at Amazon as a Technical Program Manager, however in her off time she enjoys playing a multitude of sports; coaching 8U girls hockey for the Western Washington Female Hockey Association (WWFHA), traveling to hockey tournaments with her friends, and growing the game in the Puget Sound. As more organizations continue to develop in the area, we have a responsibility to include all members of the community to feel welcome and safe. 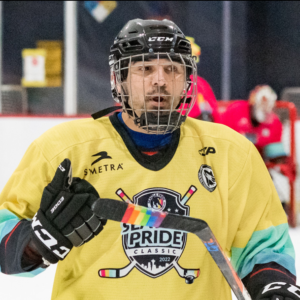 Gilbert learned to play hockey as an adult after moving to Wisconsin for his university studies. He took a chance on a newly formed developmental hockey league called Madison Gay Hockey Association (MGHA) and enjoyed the people and learning hockey so much that he has been playing hockey ever since.

Gilbert works as a diversity, equity, and inclusion transformation leader where he challenges stereotypes, makes connections between people and processes, and celebrates the added value of differences. 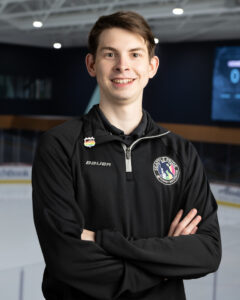 Gavin grew up in the DC area running around local hockey rinks and attending Capitals (Rock the Red!) games since he can remember. His dad played for a prep school in New England and then recreationally until they moved to the Seattle area in 2013, and it wasn’t until Gavin went to the University of Connecticut in 2017 that he found hockey again. He was a student manager for the UConn Men’s varsity team throughout his undergraduate career, becoming the second publicly out student manager since Brendan Burke. He is published in an article through OutSports.com, and has since remained in the athletics world working to normalize queer presences in sports. Currently he is attending Michigan State University for a masters degree in Sports Administration and has worked with MSU Athletics and the B1G Ten as an event manager. He has spent several years as a theater technician trained to IATSE standards in lighting and scenic avenues, and continues to combine the arts and sports where he can.

Outside of athletics, Gavin enjoys stories about other worlds and other possibilities, spending time with his boyfriend, reading scientific articles, and spending time with friends, though combining those with hockey is always a bonus. He is very grateful to be a part of SPHA and getting to help put on events since the inaugural Pride Classic in 2021. Making space for people to achieve their passions without needing their identity to always come first is a priority for him, and he wants to make sure diversity is followed up by inclusion. 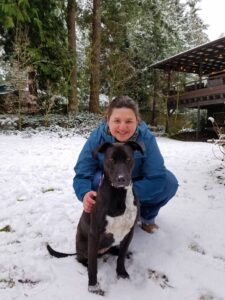 Sarah came to know the sport of hockey through love. She was never a hockey fan growing up, or much of a fan of any organized sport, really. But then she fell in love with someone who was already in love with the game, and through his eyes, she saw the excitement, the athleticism, and the belonging that is the sport of hockey…and so she fell in love again. While Sarah doesn’t play, she supports her husband with all her heart. In 2017, her husband took up being a goalie at the age of 42. His new passion fills her with inspiration every day, and she is so happy for him.

Sarah’s passion is art. She has been lucky to forge a career in it, and it dominates all of her hobbies in one form or another. One of those hobbies is graphic design, and Sarah was thrilled to create the logo for her husband’s then newly-formed Greater Seattle Hockey League team, the Trash Pandas. So when Steven Thompson asked her to help create a logo for a new association he was starting – the Seattle Pride Hockey Association – Sarah was beyond honored. SPHA combines so many passions of so many people, but most importantly, it serves as a beacon of inclusion, support, camaraderie, and of course hockey. Sarah is a fan, an artist, and an ally, and is proud to be part of this team. 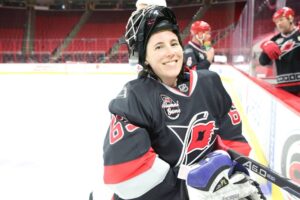 Wendy started playing hockey briefly in 2001, soon after growing her hockey fanhood from the NCAA to the NHL.  With no instruction and throwing herself as a goalie into the net, she didn’t last long before she wanted to start a family. Knowing goaltending and pregnancy didn’t mix, she hung up her skates.

For Christmas 2015, the hockey monster got rekindled when her ex-husband bought her a ticket to play in a Carolina Hurricanes Alumni Game. For a weekend she was going to be playing with former NHLers. Time to find gear and a coach so she didn’t look completely ridiculous, and since then she hasn’t stopped. She helped form the Letterkenny Irish franchise, and manages both teams.  Hockey has also become a generational event with her older daughter a teammate on the Letterkenny Irish, and her younger child learning to play via the Kraken programs.

The Seattle Pride Hockey Association goes even beyond that, allowing her to show how proud she is to be an part of the LGBTQIA community, how proud she is of her bisexual daughter, non-binary child, and gay ex-husband and his partner. She wants to happily welcome everyone who wants to play, regardless of their orientation. 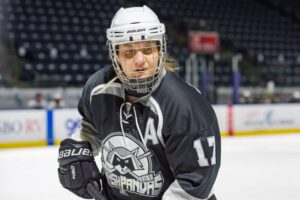 Rebecca Moloney found hockey during the NHL playoffs in 2017 and fell hard in love with the sport. Soon after, she started blogging for Seattle Sin Bin with articles covering NHL Seattle and is especially proud of her interview with Mari Horita, NHL Seattle Vice President of Community Engagement and Philanthropy.  She co-hosted the short-lived Seattle hockey podcast Celly in Seattle and is looking forward to raising it from the dead soon.

Later in 2017, she stepped out on ice skates for the first time. After hours of skating practice (and more than a few faceplants), she participated in her first team sports game since high school gym class. Currently, she’s proud to be the Alternate Captain of Trash Pandas where she scores the trashiest goals in the PNW.

Rebecca works in marketing during the day and enjoys reading and tweeting (@RebeccaBMoloney) when not playing hockey. 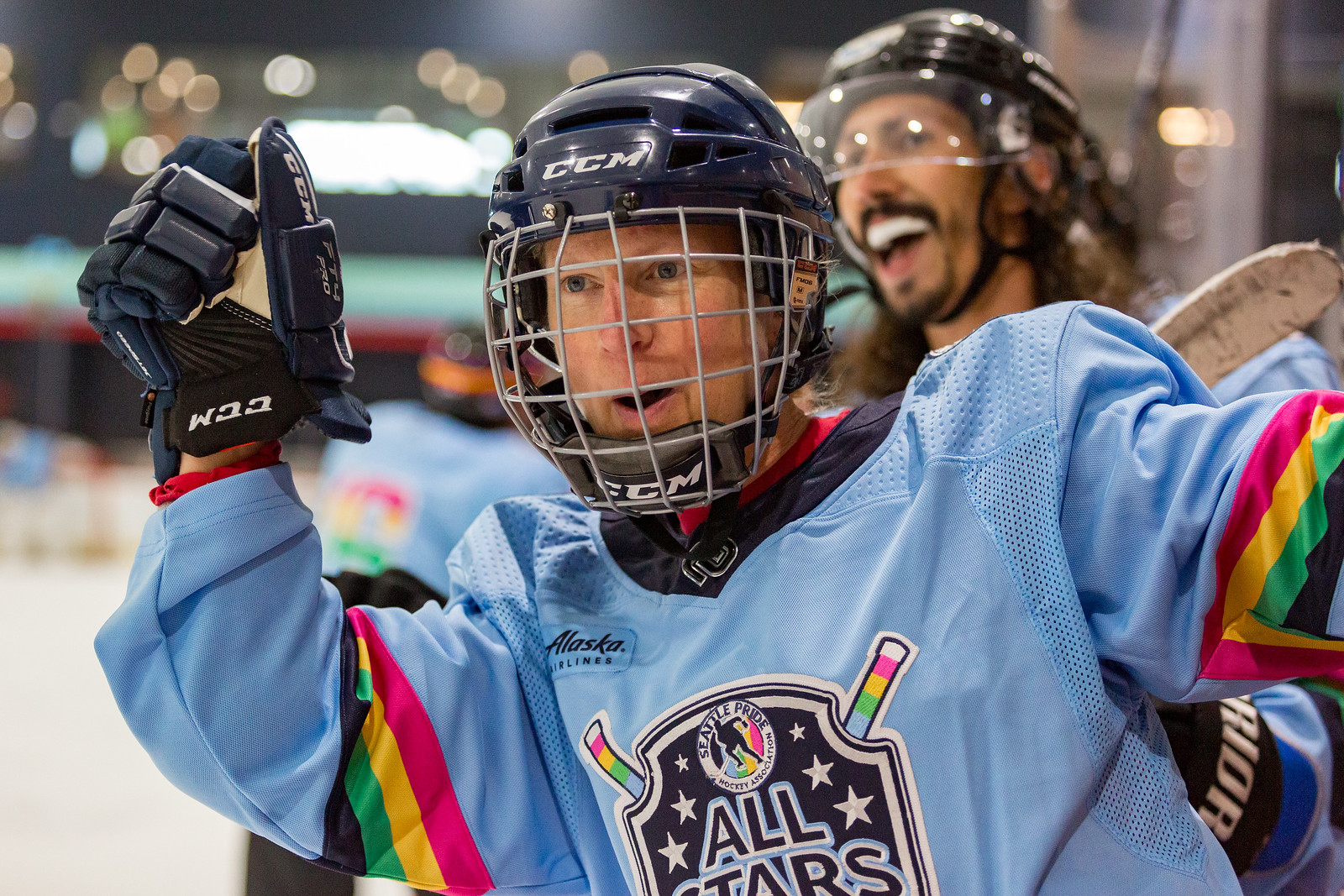 Be the first to know about programs & tournaments, including our upcoming Seattle Pride Classic 2023 beginning Friday, June 9, 2023. We promise not to spam your inbox.

MANAGE ALL YOUR HOCKEY IN ONE PLACE 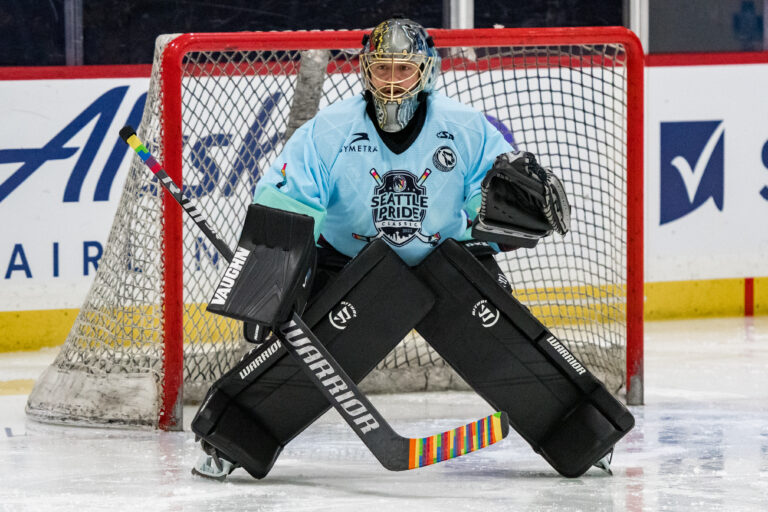